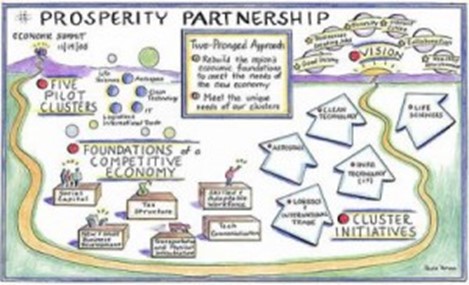 The prosperity of government determines the extent that governments can deliver services to people in the community. What is most evident in corrupt governments/dictatorships – where monies are syphoned to enrich the wealth of ruling party, much to the detriment of the welfare and wellbeing of the people of the nation, who are often left impoverished.

Currently, taxes are the chief means that the Australian Government obtains revenue to fund its programs and services. Australia faces a number of significant challenges in the emerging future, which the current government lacks sufficient foresight to consider:

We will face increased incidence of illness and disease in our population in the future.

Obesity is on the increase in our society; and as a result, we will see a higher incidence of diabetics, cardiac and other associated conditions. According to the Australian Government’s ‘Nation Health and Medical Research Council’ – “Access Economics estimated the total financial cost to Australia of overweight and obesity rose from $3.767 billion in 2005 to $8.283 billion in 2008.” (1)

There are some people in government who believe that the way to increase prosperity in order to meet some of the challenges mentioned above: is to double or triple our current population.

This could be regarded as the lazy thinking and not necessarily well thought out:

This may not be either sustainable or environmentally friendly; and will require massive investment in infrastructure: i.e. roads, housing, electricity, water and social services, e.g. health and education. The proponents for a ‘big Australia’ policy, have not provided details of how such supportive infrastructure will be funded or built.

It lacks consideration of how such a population could be sustained. Particularly in the longer term when mining boom subsides: due to new mining production coming online overseas; causing reduced prices and demand for our resources. After ‘Mining Boom Mark 2’ where are all jobs coming from to sustain such a population?

A big Australia may mean a drop of living standards due to less wealth and resources that have to be stretched across a greater number of people.

As taxation of businesses and their employees provides monies for government services.

Not only do government need to encourage prosperity in business. Like strengthening viable manufacturing, agricultural pursuits and encourage value-added services.

The Government needs to be strong to collecting its equitable share of revenue.

Like not allowing the richest to get away with paying 10 cents in dollar tax, where the ordinary workers pay as much as 30 cents or more in dollar tax.

We have seen the Government back down in negotiations with the powerful mining magnates over a more equitable tax on our resources. Given the record prices for commodities and some large mining companies, making  so much profits, that they don’t know what to do with, and spend billions of excess dollars; buying their own shares. The resources belong to the people of the nation and our share of profit should increase with the increased value of the resources

An alternative solution is to increase the prosperity of government through government owned enterprises or private/public partnerships.

In many countries, governments own businesses which contribute to the national wealth.

For example, most governments in OPEC countries own the oil companies operating on their land.

India boasts a number of state controlled corporations that are wholly or largely government owned, for example:

Oil and Natural Gas Corporation – accounts for 77% of crude oil and 81% of natural gas production in India. Ranked at 413th of ‘Fortune Global 500’ in 2010. It is the highest profit making companies in India and in 2010 was ranked 18th in ‘Platts Top 250 Global Energy Companies’.

Indian Oil Corporation Limited – India’s largest commercial enterprise and another of the highest profit making companies in India. In 2010 it was ranked 125th on ‘Fortune Global 500’.

National Thermal Power Corporation – after divestment by Indian government in 2009, who now owns 84.5%.

Hindustan Aeronautics Limited – one of the largest aerospace companies in Asia with an annual turnover over US$2 billion. Operating airports, design, manufacturing and assembly of aircraft, jet engines, helicopters, related spare parts, navigation and communication equipment. 40% of revenue comes from manufacture for overseas clients.

In Singapore, its economy is dominated by government-linked businesses which account for as much as 60% of Singapore’s GDP.

Energy generation is one area that is lucrative and essential to society. There is a growing future need for increased energy supply. This is a suitable enterprise which our government could get involved, to fill future needs in energy.

Between 2015 and 2020, it is estimated that an additional 2300MW baseload power of electricity will be needed.

According to ABC 7:30 report (Aug 2010) our import oil bill is $16 billion per year for 150 million barrels of oil. The Federal Government is projecting that this will grow to $30 billion a year in five years. In 20 years, it’s forecasted that we will need to import 400 barrels of oil. (5)

It is imperative that alternatives to foreign oil be implemented.

Australia is an energy rich nation; with large reserves in Uranium, Coal, Natural Gas, and significant potential for solar, wind, wave and production of bio-fuels.

Energy makes up a significant component of most manufacturing industries. Supplementing our energy supply and reducing the cost of energy will assist our economy and make us more competitive in the world.

Government needs prosperity, to provide for the services, infrastructure and needs of its people. It is the level of prosperity that will determine the quality of life, for the people of the nation. Hence, it is imperative that those who are elected to serve the people of the nation: to acknowledge the importance and pay attention towards enhancing and growing prosperity, whilst in government: and consider government owned enterprises (as in other countries) as a means to generate sufficient wealth needed to fund future services.

We face significant challenges with an increasingly aging population and growing health concerns, brought on by aging, and obesity. In order to meet these challenges, governments needs to give increasing attention to developing prosperity in government or face a decline in lining standards of the people.