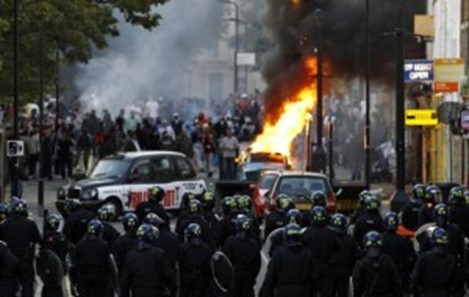 The riots in England are both shocking and concerning in their scale and duration. Particularly as England is democratic and developed nation.

The unrest highlights the multiple areas of social dysfunction; which is evident in English and other modern societies of today.

Youth today are brought up in a culture that glorifies violence, rebellion and consumerism: I see culture as having significant influence in the London riots.

Our youth are influenced by a diet of: violent entertainment (including video games); defiant ‘rap’ culture (where glorified gangsters are icons); and, the ‘must have’ fashion street wear.

The growing prevalence of knife attach (certainly in Australia) in the last several years is largely based upon the kudos given by our youth, as a status symbol. This arises from the saturation of violence in video games and entertainment.

There is a valid concern that the prevalence of violence, such as in video games and entertainment. This contributes to a desensitised attitude and disposition to violence, in the real world.

The glorification and sexualisation of crime, and disregard for authority: is reinforced in the ‘rap’ culture, where gangsters are music stars and icons to many of the youth of today.

With expensive taste, such as designer jeans costing up to $500 and sneakers $100+. This clearly differentiates youth on the basis of the ‘have’s’ and the ‘have nots’. And contributes to the segregation felt by those less fortunate.

Other than a disregard for the law, the motivation for looting is based on greed, by those who feel through poverty or unemployment there is little other opportunity in their life.

Consumerism promotes a single pointed ‘me-ism’, where everything is about myself, to the detriment having consideration of others.

It is funny how you need a licence to drive a car, but not to be a parent. Since the advent of ‘light touch’ parenting, many parents have been unsure of how to behave as parents; and, how to deal with unruly behaviour of their children.

Parents could benefit from the latest knowledge of child development. And knowing how to impart such important character traits as: respect, consciousness, consideration to others, compassion and restraint.

There has been a societal shift away from the traditional family model, where family spent much time together.

Today, the families spend less time together. Many children are engaged with many extra curricular activities. And even in the home, the family may not always share a meal, Children often spend time in their own room, with their own computer and TV, Which is considered as an alternative form of baby sitting, for overworked and over stretched parents.

This trend is also exacerbated with many parents both working, to make ends meet or having a large mortgage.

Children are channelled through our human factory education system. Which is largely focused on doing well in year 12 exams. Geared towards entry to university (or occupation); at the exclusion of personal and social development of the individual; which is particularly important during a persons formative years: between the ages of five to seventeen.

It is imperative that education also encompass such important areas as areas, such as: personal development – emotional intelligence, character building and social integration, during these formative years. And that education should also include an education in human values, if it is to be wholistic.

Typically, there is a lack of positive role models for the generation today. People with prowess and achievement, from all walks of life (be it an athletic, social entrepreneur or scientist, for example) should be given every opportunity for promotion as a role model, for the youth of today.

Respect towards society is undermined by criminality found in corporate, religious and government agencies. Criminality is sanctioned through it’s wide scale prevalence throughout society. Criminality in the upper sections of society, has contributed (as well as the youth (rap) culture) to diminishing the respect for authority by the younger generation.

Respect is based upon being considerate to others and behaving admirably towards each other. Respect begins in the home, through school and into adulthood. Respect is clearly missing in the London riots.

Where there is alienation in society, there is unrest. Alienation is a cause for conversion to extremism and fosters terrorism and rebellion.  Where people feel secluded and disconnected from the rest of society. Those people are prone to feelings of being disenfranchised, deprived and unworthy. Feelings of being hard done by a situation outside themselves, or seem to have any control over.

Without access to higher education or opportunity on the horizon, to change their future for the better: many people today cannot see a bright future for themselves.

This is exacerbated with the Global Financial Crisis; with rise in unemployment; slowing of the economy and reduction of government spending. The future looks bleak. Our youth are growing up without hope; and without hope, there is no aspiration (or striving for something better).

The London riots are the result of degeneration of many areas that are important to the cohesion and function of a society.  We can see the effects of social dysfunction in the areas listed above, in the London riots. Hence it is an opportunity for people and government to gain insight.

It signifies the importance of culture, family, education and other social institutions, towards creating a healthy society.