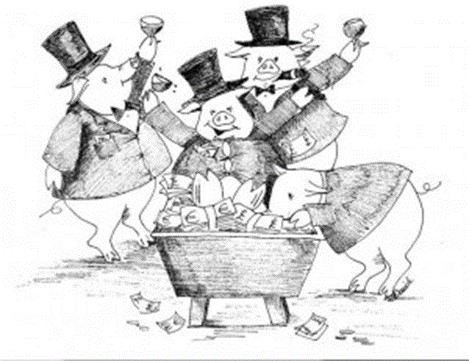 The banking sector, as a provider of credit in the form of loans towards personal and business finance: is essential to the growth of the economy and as such, plays a central and pivotal role in capitalistic markets.

The GFC almost plunged many economies towards a Great Depression. The effects of the Global Financial Crisis (GFC) severely impacted many economies of the world and it’s effects are still being felt today, some three years later.

Hence, it is imperative that we learn from the experience – which created an economic meltdown; and take necessary action, so that we can avoid a reoccurrence in the future.

Reckless lending, just to create commissions and fees, need to cease. The financial system needs to be prudent:

Lesson one: you do not lend money to people who do not have the ability to repay the loan.

Liabilities/risks need to be properly accessed and cannot be ignored with the notion that such risks can be ‘on-sold’.

The second lesson stems from the Great Depression with the enactment of Glass-Steagall Act (USA): i.e. investment banks and depository banks need to be separated.

(Let go of the notion that ‘banks are too big to fall’ and will always be bailed out by governments. And like any other company that goes bankrupt, it is the shareholders who bear the risk. This may help banks behave more responsibility.)

It is advisable to curb excessive bonuses or commissions, i.e. where they make up 60% or more of one’s pay.

This could lead to unscrupulous conduct motivated by greed. If there are excessive bonuses or commissions being paid in the financial sector, then this could induce employees to take greater risks and as such: should be accessed as a potential for additional risk, by investors and regulatory bodies.

Credit rating needs to be accurate and done objectively and ‘at arms length’.

(Some ‘Credit Default Swaps’ were ‘junk’ grade loans, but graded by some agencies as AAA loans, Because of inaccurate measurement of risk and  fees and commissions received by financial agencies (so as ‘mutton dressed as lamb’), some people were unaware of the nature of their investments and the risk they were taking on.)

Adequate liquidity and reasonable leverage rates need to be established and maintained by financial institutions.

Some banks, through lending money to people who could not pay, and by leveraging deposits by 30 times or more (i.e. for every $1,000 in cash they held, they were able to write out $30,000 in loans). So when the housing bubble burst and people could not repay their loans. These banks were horribly exposed to bankruptcy.

Not only is sufficient legislation needed, but sufficient supervision is also necessary.

The Global Financial Crisis has shown, how important a part, the banks and other financial institutions play in our economy. Deregulation has not proved to be effective and contributory to the GFC.

It is necessary, even throughout the ‘boom’ times: that financial services act prudently and responsibly.

‘Boom’ times should not be treated with a lairize-fair attitude where everything is roses and the ‘hands can be taken off the wheel’.

Unless the causes of the Global Financial Crisis are addressed and proper remedies taken, then, the likeliness of a reoccurrence remains. In the words of the economist  Paul Romer: ‘A crisis is a terrible thing to waste’. We may not be in a position to be able to afford or want another bail-out of financial institutions, if something similar to the Global Financial Crisis was to occur within the next decade. As the old adage says: ‘An ounce of prevention, is often worth more than a pound of cure.’

Whilst some action has been undertaken to minimise the occurrence of GFC in the future, many proposals by eminent economists, politicians, business leaders and journalists have not yet been implemented.

‘I.O.U. Why Everyone Owes Everyone and No One Can Pay’ by John Lanchester. Simmon & Schuster Paperback, New York, 2010.