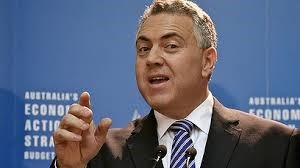 Budget emergency, fiscal deterioration, fiscal blowout is a common ploy used by incoming political parties when newly elected: (particularly by Liberal or right wing parties) to justify or validate their pursuit of conservative, right wing, Liberal agenda to enhance business profitability: by reducing government regulation/supervision of business practices; selling of public utilities or assets; and slashing or downsizing government services and benefits, sacking public servants – in order to reduce cost of government, to facilitate business and personal tax cuts (which tend to favour those on higher income brackets). This is usually at the expense of marginalised and poorer persons who are most in need. Often it creates a greater segregation between the ‘haves’ (richer persons) and ‘have nots’ (poorer persons).

In Australia, with all the pre 2014 budget talk of budget emergency, fiscal blow outs and growing deficits. With the Government’s austerity measures that tend to affect the poorer persons of our society comparatively to the richer persons. Such as the proposed axing of family benefits and chid payments, increased fees to visit the doctor and costs medicines, raising the retirement age and reducing the indexation of pensions and increased fuel tax.

On the contrary, the budget also proposes: a 1.5% company tax cut that will benefit 800,000 businesses; increased defense budget, with the purchase of 58 new F-35 joint strike fighters at a cost of $12.4 billion; a $5.9 billion Asset Recycling fund – a 15% bonus payment from the Federal Government, to encourage the State Governments to sell their public assets, and a $11.6 billion Infrastructure Growth Package. This does not seem consistent with having a budget emergency and massive debt and deficit? (1)

According to The Guardian, in 2011-12: ‘Paul Ramsay, who gave $615,000 ($515,000 from Paul Ramsay Holdings and $100,000 from Ramsay Health Care, of which he is the majority and controlling shareholder)’ as a political donation to the Liberal party (4)  This brings into question the role of political donations and political lobbying in shaping our government policy.

The proposed sale of Australian Hearing, Defence Housing, ASIC registry and Royal Australia Mint also raises questions regarding political donations/lobbying from private industry. (1) The job losses at Australia Post and plans for reduced services are aimed to increase profitability and hence increase its sale price; making the idea of privatising the postal service more palatable to the Australian public, compared to being sold for pittance.

Proposed changes to tertiary education sector: deregulation of university fees which may raise fees for many courses; higher interest for students on Higher Education Debt: will preclude many people from lower social groups obtaining a tertiary education and prevent them breaking free from their lower class background. The measures will increase the divide between the ‘haves’ and ‘have nots.

The deregulation of university fees and from 2016, providing financial help to people studying at private collages; could be seen as a prelude to privatisation of our tertiary education sector.

Reducing expenditure is just one side of the budget equation. Without an equal focus on revenues, the 2014 budget could be seen as biased. Making cuts to education, health and welfare, which would more significantly affect the needy, compared to those of greater wealth.

Other than an increase for fees for medical services and medication (to fund a questionable future health research fund). And an increased fuel tax to fund spending on roads. (Though it could be likely that petrol reach $2.00 to $2.50 per litre in the next 3-5 years and there will be less people driving on our roads anyway.) And a small increased income tax of 2% for those earning over $180,000 apply to adjusted taxable incomes, so it is possible that it could be minimised through using non Fringe Benefit Tax salary sacrifices (e.g. super or otherwise deductible expenses), though this is not specified in the 2014 Budget. (We will need to wait for legislation that is passed for greater detail.)

On the revenue side, according to the federal budget report in the Herald-Sun on 14th May 2014: from a revenue of $391.4billion, individual’s income tax makes up $183.6 billion, whilst Company and resource rent tax makes up $75.3 billion.

A ‘Commission of Audit’ is needed to seriously review the tax minimisation schemes and loopholes that allow Companies and wealthy individuals to avoid paying their fair share of tax on profits earned. Companies, such as Starbucks, Apple and Google have been in the media both in Australia and overseas. (5) And whether the special taxation arrangements to certain Companies and subsidies (e.g. fuel tax) are warranted and equitable. Do mining companies pay a reasonable restitution for extracting the finite resources of our Country, particularly when the value of the resources increases?  In Victoria, royalties for mining gold is zero. As the federal treasurer Joe Hocking has said: ‘We all need to do our fair share of lifting’ Is it fair that the poorer people proportionately pay more than those more wealthy?

Former Liberal Prime Minister John Howard, bolstered with the extra Government revenue of the mining boom, reduced income tax rates of individuals. There is a case to be made, that in the current times with the reduced revenue from the fading mining boom; that perhaps income tax needs to be raised. Particularly when there is much rebuilding needed in the Australian economy.

Where ever possible, Government procurement should favour Australian manufacturing. The Government is spending our taxes and wherever feasible, these should support Australian jobs. It is short sighted to award contracts based upon initial purchase price without also considering the whole of life cost during ownership. The Government should also realise that when purchasing Australian goods and services, not only does the money stay in Australia; but various taxes (e.g. income tax, GST, etc.) are returned to the Government. Governments should also recognise that 100 people working are 100 people not receiving unemployment benefits, reducing the cost for Government. (This is unless the (Conservative/Liberal) Government’s goal is to reduce the pressure on wage rises by having more people unemployed?).

Australia needs manufacturing. We are an island country. A war or conflict in our region could prohibit goods arriving here by sea or air. The ability to build ships and cars could be crucial to maintaining our defence. It is with some concern to hear of the Liberal Government plans to abandon ship building in South Australia and source submarines from Japan and the lack of support for automotive manufacturing in Australia. Some 40,000 vehicles are purchased by various governments annually in Australia. If these vehicles were purchased locally, it could substantially support an Australian car manufacturer. It is regretful to hear that the iconic Rossi Boots were unsuccessful to secure a contract to supply 100.000 non-combat boots for Australian soldiers over five years, worth up to $15 million. (7)

It could be that the Federal 2014 budget, that focuses on significant spending cuts; aims to create a fiscal surplus before the next election, which will be used to deliver further tax cuts (is short sighted)? We believe this is the Liberal party’s plan to implement their conservative, right wing agenda, and be successful at the next election. The Liberal party undertook a political campaign of sleuth by announcing very little of their political agenda prior to the last election. Considering that many of the initiatives announced in the 2014 Budget were not raised during the political campaign before the last election; hence the Liberal government do not have a mandate from the people for many proposals in the 2014 Budget. A double-dissolution election could be seen as a fair means for the Australian people to properly decide who they would like to govern this country.